Remember, back in May of 2018, when a meme on Facebook made the rounds saying, “China banned Peppa Pig for being too Gangsta?!” I remember reading it and laughing at the time, but now I can’t help wishing it was true.

Peppa Pig is a British children’s cartoon centered on a young anthropomorphic she-pig, named Peppa, and her adventures with her family and friends. CCTV broadcasting first aired the show in China in 2015, however, I had no idea what it was until I looked the cartoon up on YouTube back in January of this year (thank you vpn gods).

At first, I thought the show was cute…until I started noticing Peppa everywhere I went. I’ve seen her on a wide variety of random things from posters and statues outside my local Walmart in Lishui to Chinglish car decals, clothes, food decorations, and bathroom stall art. Her popularity has grown so much over the past few months that I swear you can’t go ten steps in China without seeing Peppa Pig on something or other, and it’s a bit tiring. 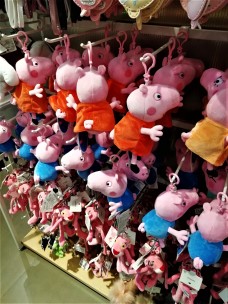 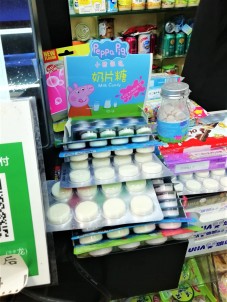 A Peppa endcap at Walmart 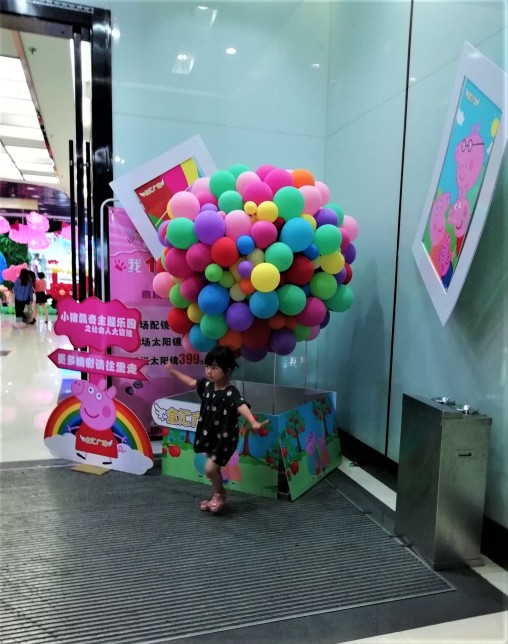 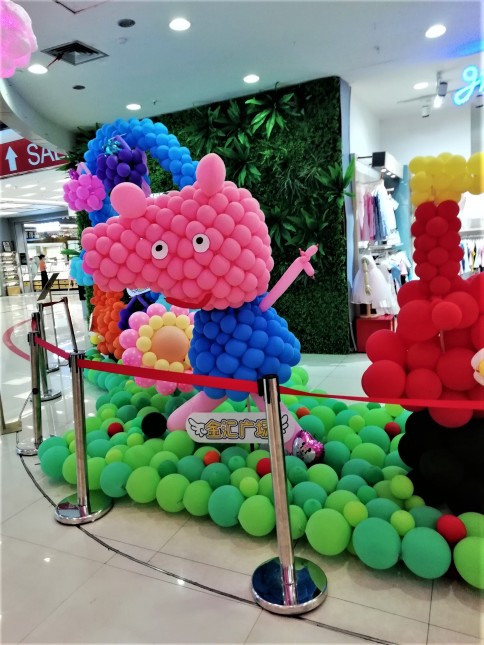 I’ve discovered that my students (both Middle and Primary) adore Peppa. You can find this pig as doodles on their homework, clips on their hair ties, and lately temporary tattoos on their wrists.

During one of my Harry Potter-themed lessons centered on magical creatures, I asked students to write down at least five magical creatures that we had learned previously. To my dismay and consternation Peppa had invaded my lesson: while I was checking the first class’ answers, instead of writing “mermaid, giant, unicorn, dragon, fairy, etc,” many had written down “Peppa Pig, Mommy Pig, Daddy Pig…”

I had to tell each class after that: “You can’t write Peppa Pig! No Mommy Pig! No Daddy Pig! Only magical creatures!” Many found my fury amusing. One student had the gall to ask, “What about Georgie Pig??” “NO!!!”

And it’s not just Primary and Middle Schoolers who are captivated by her. High Schoolers and adults love her, too. The consensus among older students seems to be that Peppa is “too social” or “very society.” For the longest time, my fellow American English teachers and I argued what was meant by Peppa being labeled as “social.” We came to the agreement that the Chinese were using the word “social” to refer to things as trendy or cool – much like that “Anti-Social Social Club” shirt that is very “in” at the moment.

Regarding this past May’s “ban,” it seems Peppa in China gained international news only because she was taken off Douyin, a free video-streaming app. I admit Douyin can be fun. It can suck you into mindlessly scrolling through silly short videos for hours, much like how it used to be popular to watch viral vines when I was in middle school.

Global times stated that at least 30,000 videos under the #PeppaPig hashtag had been removed from the platform. Douyin hasn’t commented on it, and no one seems sure about why the videos were removed exactly, but speculation online was that Peppa is a symbol for “subversive underground ideas.” Peppa isn’t the first popular figure to take a hit: Winnie the Pooh, the Big Bang Theory, Alice in Wonderland, Dr. Seuss, the letter “N,” weird oversized buildings, Hip Hop, and a slew of other beloved or out-of-the-norm things have been banned in China at one point or another. Ironically, Animal Farm was just re-banned this year. 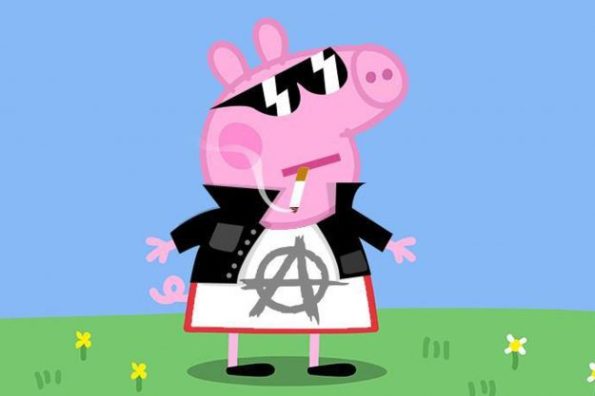 Western netizens have translated Peppa’s “social” label as meaning “gangsta.” I don’t really buy into that label as its more clickbait-y than anything. I do find it hilarious when Peppa appears on seemingly inappropriate things or places. A CNN article states that giving innocent Peppa the “contradictory traits of a thug” makes people laugh in a “massive nonsensical joke” allowing young people to rebel. This tends to happen through the years as China likes to latch onto popular memes and wring them out while disregarding copyrights.

And boy, how they disregard copyrights! People will use what they want, where they want for their own businesses. Trademarking don’t really exist in China,  as it’s just too hard to keep track in such a populous nation, leading to all sorts of Chinglish hilarity with your favorite cartoon characters or movie idols. For example, besides Peppa, you might find Mr. Bean advertising a coke, popcorn and condom deal at the cinema or Pink Panther and We Bare Bears adorning everything from cellphone covers and makeup to thongs.

Peppa definitely won’t be the last popular figure to come under fire out of seemingly nowhere. Who knows, she may be banned from more than just Douyin in the future! I highly doubt this, though, as China’s slated to open two new Peppa Pig theme parks next year. For now, we just have to suffer through this Peppa Pig fatigue. I’m hoping China’s next “gangsta” character is at least a bit cuter and less shaped like a hairdryer. 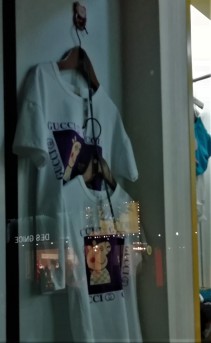 Peppa on an advertisement

More peppa outside the mall.

View all posts by Stephwaxpoetic